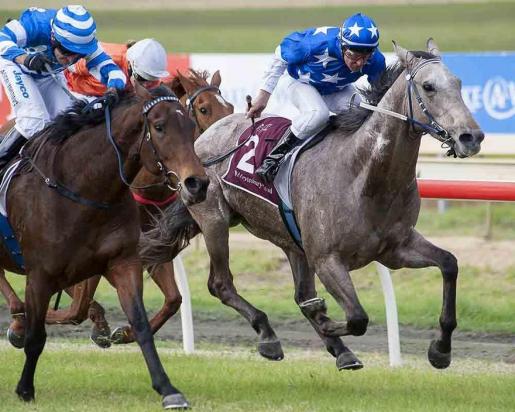 The lightly raced Al Faisal found himself back in the winners stall after more than ten months on the sidelines scoring in the $12,000 Narrogin Nationwide Jewellers Handicap (920m) at Narrogin on Saturday.

Trained by astute horseman Bruce Watkins from his Bunbury base the grey gelding was helped over the line by Kyra Yuill – bringing up a double for the rider and making it a clean sweep for the female riders across the eight races.

Having drawn the outside barrier of ten runners, Al Faisal settled close to the speed and was able to hold off the challenge of Tatoli to score by a head in gritty fashion.

The horse has been a winner two starts earlier over 1200 metres at Pinjarra on July 18 2013 when short priced favorite.

Al Faisal is a half brother to the stables half-brother Kerrific who was a winner of thirteen races (inc. 2x Group 3 wins) and over $612,000 in stakes earnings.