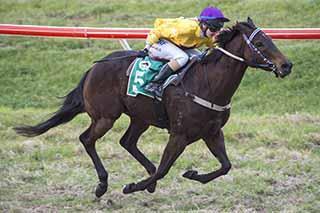 Watkins Racing has made it three winners in five days with I’m A Bluebagger winning his second race at Pinjarra in the $15,000 Racing 4 September Handicap (1600m) on Thursday.

With the stable having finished second in the opening race on the program they were left waiting till the final race when apprentice hoop Andrew Castle sat close to the speed before powering away for a solid win ahead of the Daniel Pearce trained Miss Radler – much to the delight of favourite punters.

Having scored at the circuit only two months earlier the lightly raced son of Helenus is starting to put the score on the board this campaign. Having debuted in July 2013 the horse had little luck in his two runs that campaign and a slight setback would keep him away from the racetrack for nine months.

This time around the horse is racing up to his ability having won two races and beaten in a photo finish in his four runs back from a break.

I’m A Bluebagger is from the smart Western Australia mare Amarna who won seven races and over $100,000 in prizemoney.

The win followed up from Deb’s Delight scoring at Belmont on Wednesday June 4 with Peter Hall aboard.